What is SAP FIORI?

If you are a user of SAP, you already know that applications and interfaces of the Enterprise Resource Planning (ERP) are a little bit old fashioned and the screens are not very user-friendly.

It is the opposite of SAP FIORI and the framework SAP UI5. Indeed, you can personalize the user experience and everything is aligned with new technologies.

The portal of applications can cover the most used business process. The design is transformed to have an ergonomic, optimal user experience and be fully device responsive.

Simply put, Fiori is a collection or a catalog of SAP applications that are executed on mobile phones, tablets and, computers. These applications  are developed with the help of the methodology named Design Thinking. They follow specific design guidelines for the needs of your industry.

SAPUI5 is a combination of the SAP HTML5 library. It uses the JQuery library as the main library and many others specific to SAP.

You can use it to develop various Fiori applications, improve the fluidity of the business process, and reduce the number of clicks to end the process.

Of course, this is a mobile-friendly application that you can use either on your phone or tablet. It adapts to all your different screens.

From the Phoenix Project until SAP Fiori 3.0

The Origin of the project

The very first version of SAP FIORI emerged in 2008. It was known as the Phoenix Project and it inspired the actual logo.

The main goal of the project was to ease the use of the ERP SAP for final users. Indeed, there were lots of restraints because of coupling different versions with backend technologies (JAVA or ABAP) and by impossible extensibility.

At the time, the applications ran on SAP GUI, the graphical interface that allows users to interact with the SAP system and perform various tasks, such as entering transactions, running reports and accessing data.

The first version of SAP Fiori was released in 2003 with 25 applications. These lasts gave the possibilities for the user to manage and realize common professional opérations such as purchase orders management.

It has been an immediate success and various experts commended this innovation. That is why SAP decided to keep releasing applications. Almost 10 years later, more than 14 000 applications are available. Moreover, SAP published its library of applications suitable with S4/HANA, ECC, or SAP BTP.

SAP FIORI technology will bring a lot of benefits :

Nevertheless, for many years we remained on the same system. It took until 2016 to see the release of version 2.0 of SAP Fiori.

It offers a complete overhaul of the ergonomy of the application, some modifications to improve the design responsive mode, and the integration of new tools such as Ariba, SuccessFactors, Concur and, C/4Hana.

Keeping up with the trend and changing user demand, SAP released SAP UI 3.0 in 2019 (the latest version). Besides a mended design, the uniformization of the appearance is the main change. In fact, until then, each tool had a different design.

Users needed to adapt their use and they wasted lots of time. It was therefore necessary to adapt and learn to work with them, which was not necessarily practical. As a matter of fact, the new SAP Fiori 3 theme is called SAP Quartz Light.

It is extremely simple and minimalist, which makes it easy for customers to adapt it to their brand. 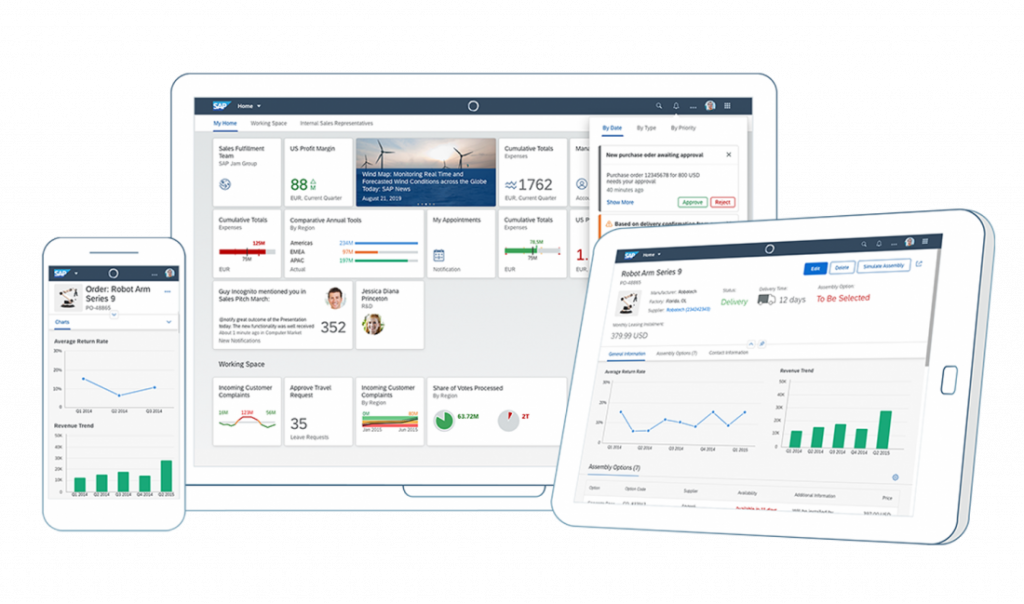 This version also integrates SAP Co-Pilot not only as an extension but as a real tool that everybody can use. This smart personal assistant like Siri or Cortana supplies cross data from different tools in real-time.

At last, the most remarkable innovation of this version is the implementation of integration cards dedicated to SAP UI5.  It is simply a limited space (most of the time a rectangle) that groups a certain amount of information and which appears directly on the home page of the application.

Here is a selection of five SAPUI5 cards that can be very useful :

Once again, SAP offers a large number of information about the existing cards.

In addition to the new Quartz Light theme and the cards, a brand new header bar has been aligned to best fit all SAP products and to be as simple as possible.

Also, the content is more scalable. SAP provides enhanced content integration: for example, users will have the possibility to define any environment site as a start-up page. Machine learning techniques with proactive notifications are also implemented to better manage the flow of information

As we explained before, SAP Fiori applications are developed with the SAPUI5 technology for the web and iOS native applications. Thus, they can be used on smartphones, tablets, or computers via an SDK (Software Development Kit) for the iOS part.

This architecture is composed of a database and a backend system where we can find the SAP business applications to designated SAP Fiori applications.

It also includes a reference library that provides all the documentation and information to execute or configure SAP FIORI applications; a front-end server, an SAP Gateway used for configure and activate OData services, and a proxy / reverse proxy.

Finally, it possesses a launchpad characterized by application dashboards and the Integrated Development Environment (IDE) which supplies all the functions to modify or improve the SAP FIORI applications already developed. It is also possible to create new applications.

The Features of SAP Fiori

During the first years of its operation, the application had a few new changes in its design to offer a better experience for users.

Easy to use: the interfaces are easier to use in comparison with the old ones. In consequence, your work will be more productive. With menus and thumbnails, Fiori can help you to reduce up to 64% of the time dedicated to some tasks by reducing the number of clicks.

Responsive: The applications can be adapted for all types of devices (computers, smartphones, tablets…)

Performances: to improve the performances and to reduce costs with the centralization of all the actions from the users.

UI/UX Design: the user experience is improved with simple and refined designs. The interface is much more intuitive for users.

Maximized for S4/Hana: Fiori is maximized for the SAP S4/Hana workflows. It modernizes companies that build ad hoc processes on ECC. It helps you to make the best use of migration toward S4/HANA

If this article has convinced you to switch to SAP Fiori, you can visit our page dedicated to SAP Fiori. Our expert team remains at your disposal to accompany you in the Fiori adventure, do not hesitate to contact us! 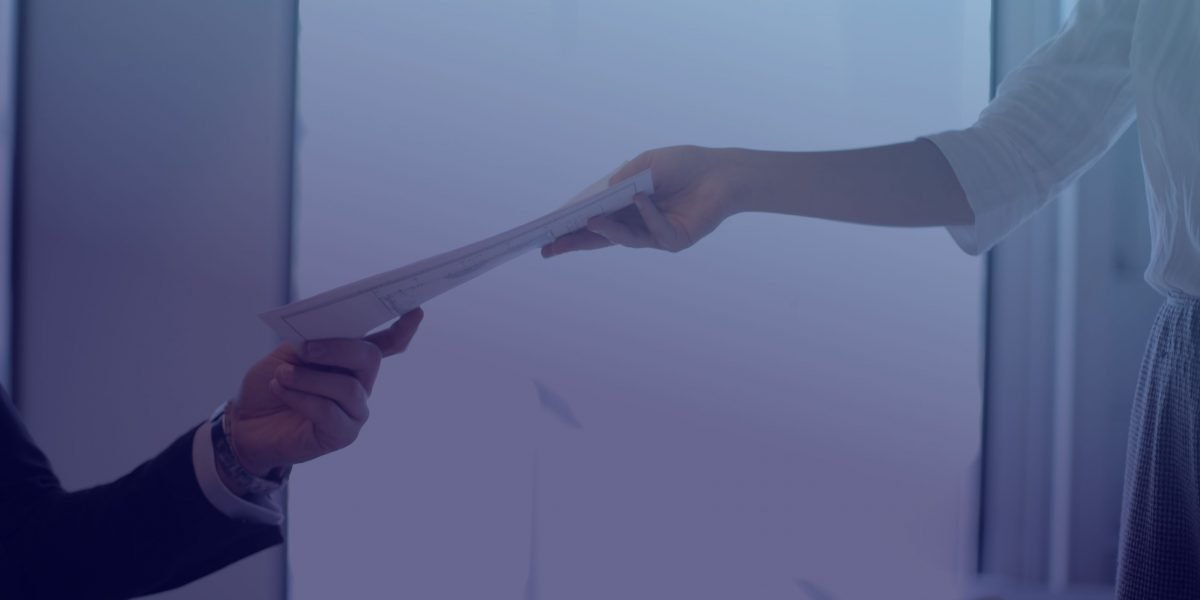 What is an SoD report ?

The SoD report is a key element in the internal security audit of companies. It allows you to update, ensure 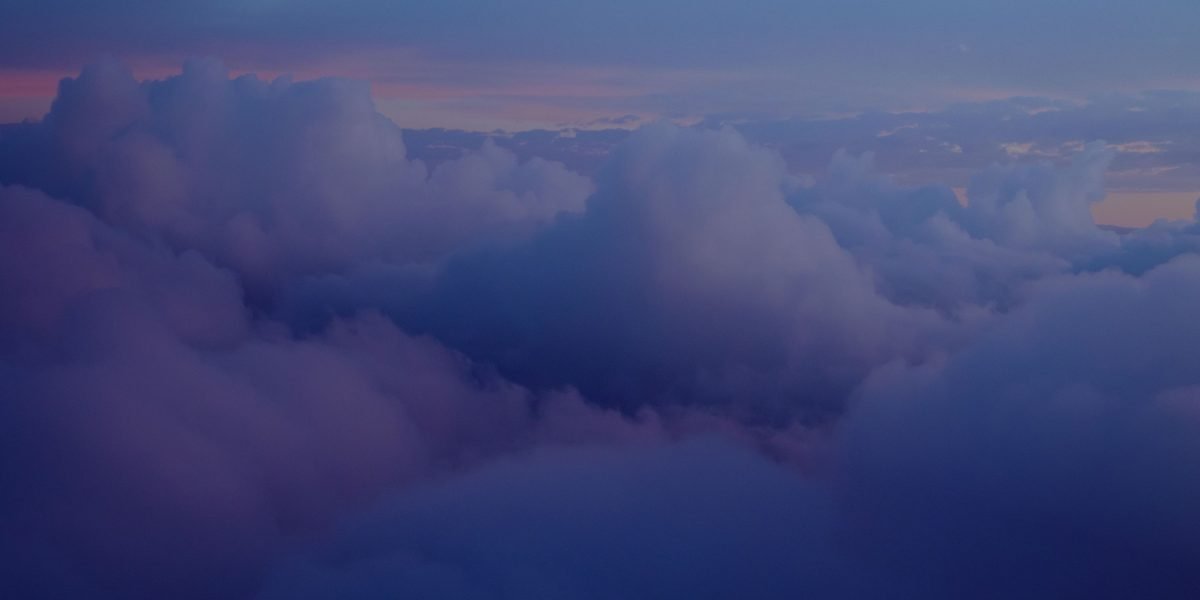 The Cloud has become a must for companies. Like SAP Analytics Cloud, it allows to centralize a large amount of 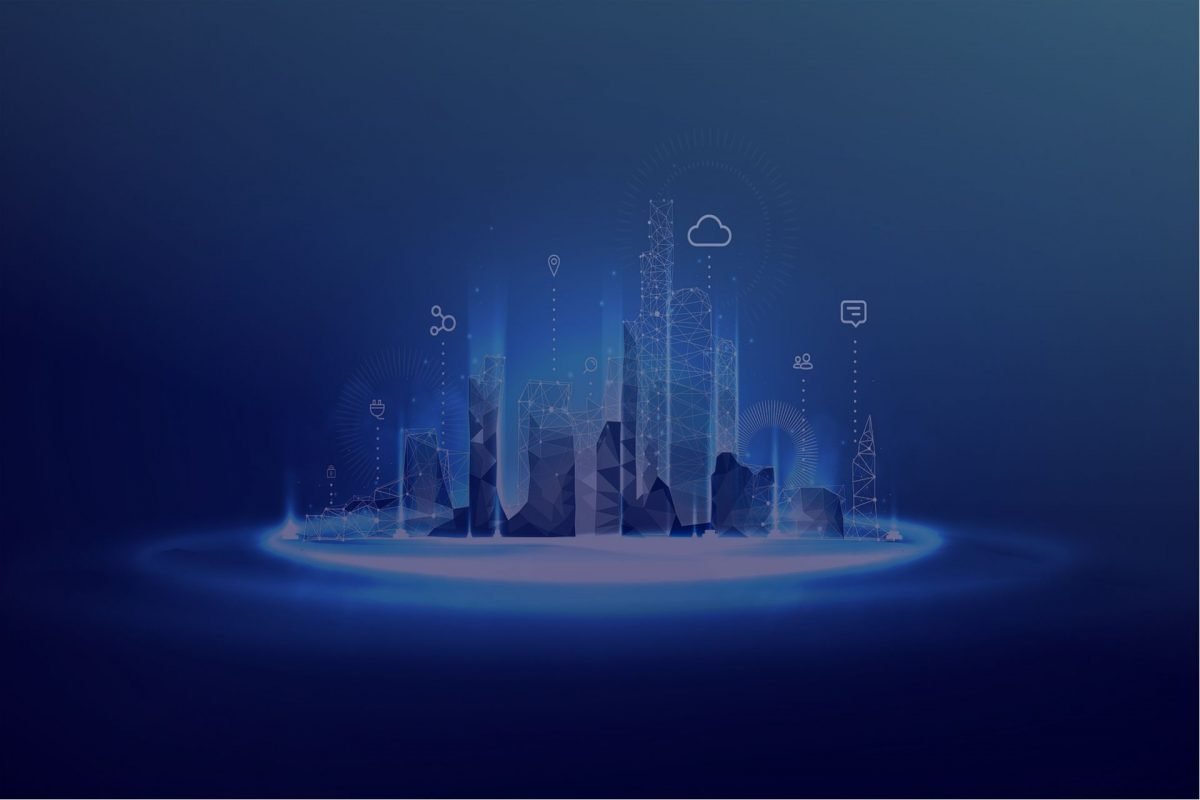 The ERP market is growing worldwide, especially in Europe. The company SAP is able to stand out with its innovative

The SoD report is a key element in the internal security audit of companies. It allows you to update, ensure and improve

The Cloud has become a must for companies. Like SAP Analytics Cloud, it allows to centralize a large amount of data in

The ERP market is growing worldwide, especially in Europe. The company SAP is able to stand out with its innovative solutions. Why 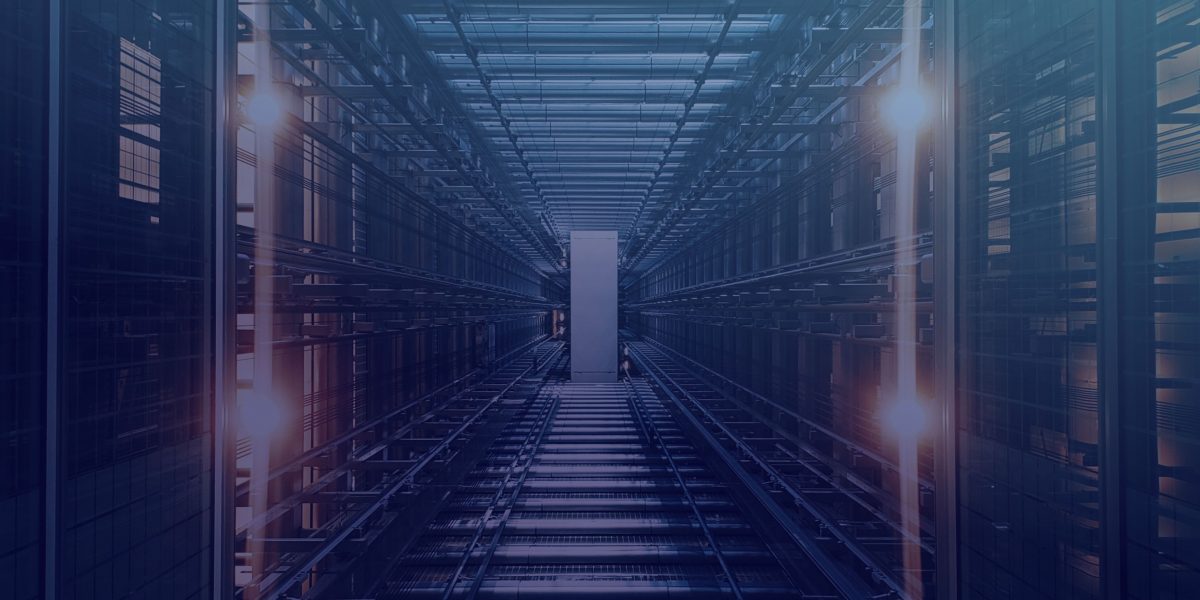 In 2027, SAP will cease promoting SAP ECC to focus on S4/HANA. Are you afraid of migrating? Yet it can bring you 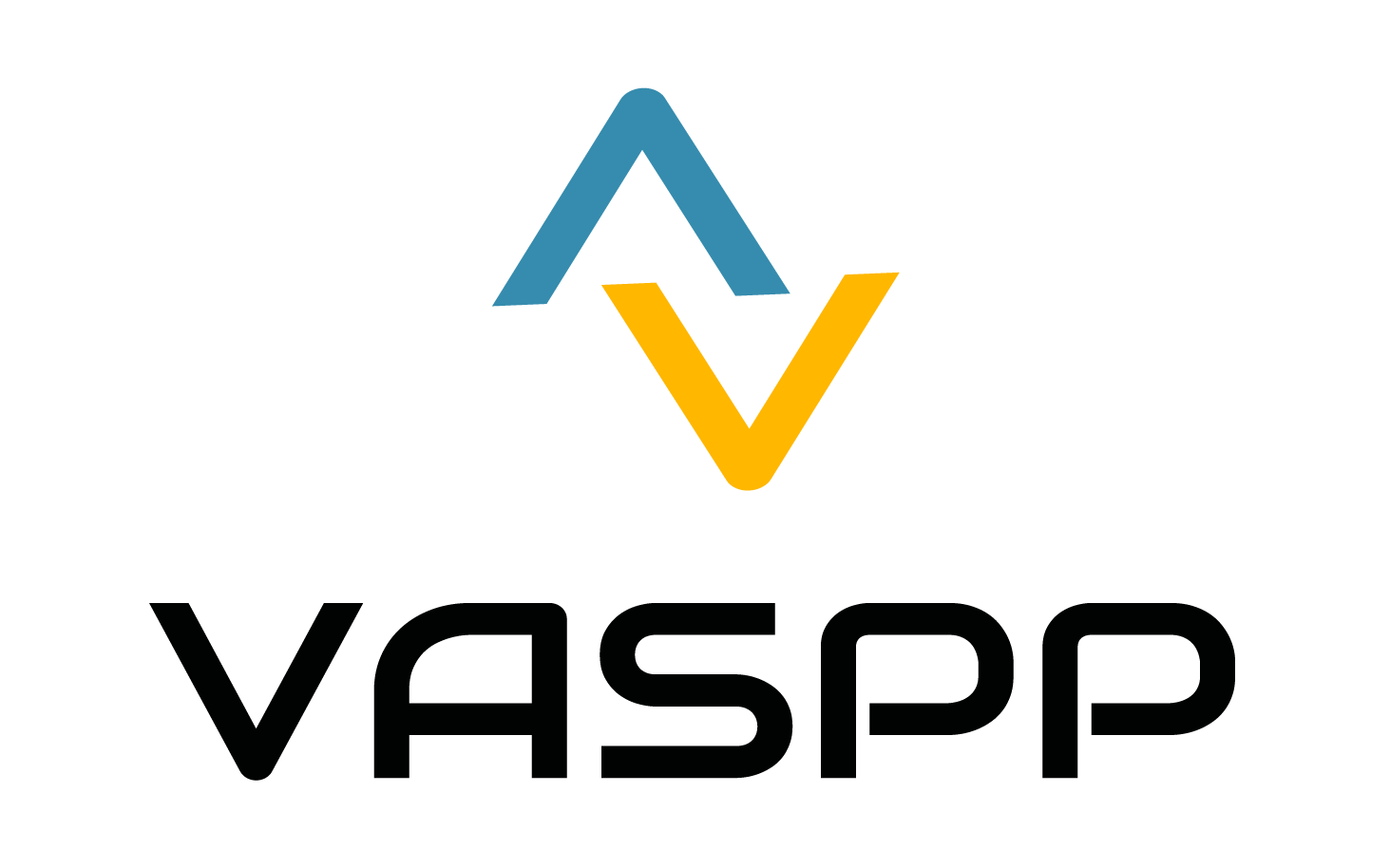